Long strolls through Parque Chapultepec and vegan lunch at the cafeteria of a Hare Krishna temple – the memories of my first visit to Ciudad de México in 2014 make the city seem relaxed and peaceful. Upon my return, the impression is different. With 9 million inhabitants in the center and 20.4 million inhabitants in the greater urban area, Ciudad de México is the most populous city in North America. It takes the bus almost three hours to get from the first signs of sprawl to Terminal Central del Norte. But not just the size of the city, the language, too, poses more problems than expected. Without a travel companion fluent in Spanish, even simple, everyday things are difficult and exhausting. Nevertheless, the kindness of friends and fellow writers makes my stay worthwhile.

The first day I spend in bookstores and libraries in the quarters Juárez, Roma Norte, and Hipódromo, a great activity for everyone not fluent in the language of a country, but interested in its literary landscape nonetheless. First, I visit Aeromoto, a tiny library in Colonia Juárez established when four friends decided to make their private collections of books on contemporary art available to the public. They have since expanded the collection to include other topics such as literary studies, architecture, design, and city planning. The next stop is its exact opposite: El Péndulo in Roma Norte is part of a bookstore chain with branches all over the city. They are “cafebrerías”, which means that beside books, DVDs, and vinyl records, each store features a café and restaurant with various Mexican and international specialties.

Just a few corners away is La Increíble Librería, a bookstore with the vibe of a design museum. The combination of rare volumes, new publications, and artsy trinkets is interesting, but leaves you wondering if you should touch anything at all. The last stop is Under the Volcano in the quarter Hipódromo, a small used bookstore on the top floor of the British Legion named after the novel by Malcolm Lowry. It features many British and American literary classics as well as English introductions to Mexico’s history and culture.

Palpable connections between fact and fiction

On the second day is dedicated to exploring literary landmarks in the city’s historic center. I start with breakfast at Café La Habana, the real life counterpart of Robert Bolaño’s Café Quito in his novel Savage Detectives. Freshly pressed orange juice and scrambled eggs make it difficult to imagine it as a smoke-filled den of vice, so I begin to wonder about my intentions coming here. Why do we visit places that famous writers have frequented or memorialized? For some it is a pilgrimage, an act of worship towards writers they greatly admire. For others it is curiosity, they look for signs of life, for the palpable connection between fact and fiction. I began reading Savage Detectives for my trip, but put it away after a few chapters, annoyed with the protagonists’ phallocentrism. Yet I enjoy being in this café because it comes with a story.

My next stop is Biblioteca de México. Beside the regular library and a bookshop, the impressive building houses the private libraries of five Mexican intellectuals that shaped the country in the 20th century. Temporary exhibitions in the indoor patio show the life and work of writers, translators, and others connected to the written word. I even come across a catalog comparing Mexican and German comics and children’s books presented at the latest children’s book fair in Bologna. Outside on Patio Octavio Paz, visitors are gathering for a panel discussion organized by the poetry festival Di/Verso. The poets Abdellatif Laâbi, Nuno Júdice, and María Rivera talk about the intersections between poetry and politics in a way that reminds me of the Art & Activism talks at Verses Festival in Vancouver. María Rivera advocates to combat the ever-present violence in Mexico with compassion for the victims; her statement is met with applause. 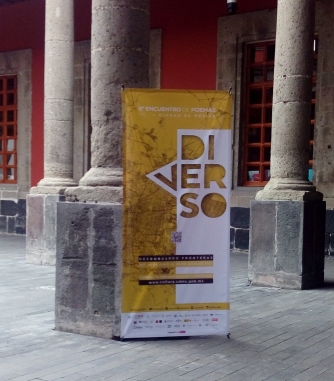 The last place I visit in Centro Histórico is the Convent of St Jerome. Sor Juana de la Cruz, an extraordinarily gifted thinker and writer, lived here from 1669 until her death in 1695. By the age of 12, she was fluent in Spanish, Latin, and Nahuatl, the language of the Aztecs. Her outspokenness on the right to education for women not only brought her fame beyond the borders of what was then considered New Spain, but also caused a clash with the predominant forces of the Catholic church, who eventually forced her to give up her library. She died a year later after she caught the plague while caring for her fellow nuns. The square behind the convent is surprisingly calm. I can hear birds singing. First a place of freedom and creativity and then of oppression and tragedy, the Claustro, as it is called in Spanish, has been converted into a university bearing Sor Juana’s name. Amongst their many degrees is one in Creative Writing and Literature.

A country you always want to return to

My last day is spent strolling through the streets of Coyoacán, a quarter south of the center most widely known for the Frida Kahlo Museum. It is a Sunday, people are outside enjoying the sunshine before the inevitable rainfall in the late afternoon. I have coffee with Lauren, a blogger from the UK who has been living in and writing about Mexico for two years. She is planning her departure from the country to travel around South America, but she is certain that she will come back: “Mexico is a place you always want to return to.” At the time, I was sure I would have seen it all by the end my second trip and turn my attention to a new place to explore. But a few months later, I find her statement to be true. There is always more to see and read about Mexico.