Places are always more than what meets the eye; the stories of previous and current inhabitants are inscribed in them. They can be visualized and perpetuated in many different ways: Murals, street signs, and plaques inform and interpret on site, and the number of websites and apps to enhance your visit technologically is increasing. While they often only tell the story of currently dominant groups, there are initiatives dedicated to amplify the voices behind minority histories.

Strathcona is a part of Vancouver shaped by immigration. This mural portrays its history before WW I by tying architecture to socio-politic and socio-economic circumstances. It was sponsored by the organization C.E.T.A. (Creating Employment Through Art) and a local business. Amongst others, the mural features stories about Chinese and Japanese migrants and the First Nations population.

Strathcona was one of the few neighborhoods in which migrants from Asia were allowed to live in the 1900s. Since people from China formed the largest group among them, bilingual street signs are still a part of the cityscape, just as many Chinese schools, preschools, and churches. The Canadian government only apologized for its discriminatory policies a few years ago. 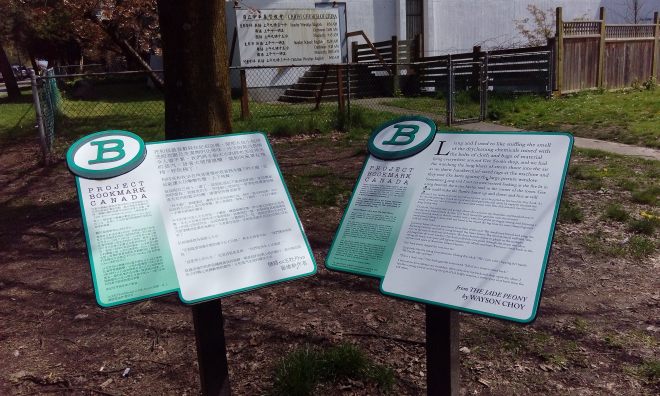 The neighborhood’s history also appears in fiction: The Jade Peony by Wayson Choy takes place in Chinatown and Strathcona in the 1930s and 1940s. A plaque by Bookmark Canada marks the spot on the southeast corner of Pender Street and Gore Avenue where the laundry service featured in the novel used to be. To this date, it is the only bookmark in Western Canada and the only one in English and Mandarin. 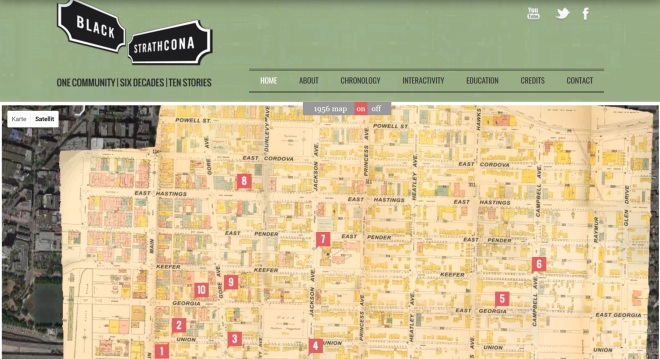 The project Black Strathcona explores the history of the black community in the neighborhood. Launched in 2014, the website features an interactive map with ten stories that can be viewed online or by reading the QR codes during a visit. Many of the storytellers in the videos are local community organizers and artists.

The Squamish arts and education organization Kwi Awt Stelmexw has a similar map project: Oh The Places You Should Know shows the original Squamish territory with place names and stories. Pointing out the importance of the connection between language, land, and people, it is meant to create and foster discussion between First Nations and settlers about colonial history, local geography, and indigenous perspectives today.

Plaques in British Columbia used to feature only settler history in an effort to eradicate the history and claims of oppressed First Nations. Recent efforts such as the info board on the history, community, and practices of the Stolo people in Hope aren’t always met with understanding.